The Gospel of Peace 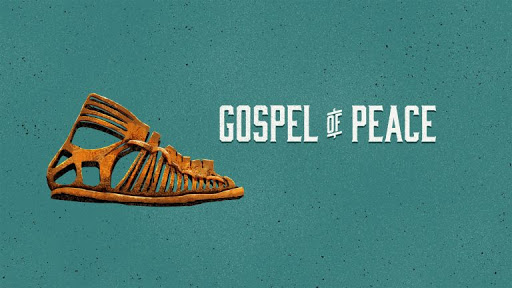 I want to remind you of some of the things that Jesus said right before he went to the cross, “Now is the judgment of the world” and “if I be lifted up I’m gonna draw it all unto myself” (John 12).

Christianity still has God punishing sin now and in the future. I have good news for you, he came here to bring a cessation of all hostility and to make man righteous. “He who knew no sin became sin that we might be made the righteousness of God in Christ” (2 Corinthians 5).

“And how shall they preach except they be sent? As it is written, ‘how beautiful are the feet of them that preach the gospel of peace’”

It doesn’t matter if your grandma, grandpa, or even your momma sent you. You cannot say you are sent unless you are preaching the Gospel of Peace. This verse says “how beautiful are the feet of them that preach the Gospel of Peace and bring glad tidings about good things”.

If you have any bad news like, “God’s telling us he’s fed up with this and he’s not gonna tolerate this anymore. This coronavirus is God showing you that he doesn’t like the stuff that’s going on this planet”.

Paul is quoting this from Isaiah and you know how easy it is to quote something and preach a whole sermon on it but out of context. I want to show you that Paul got it right about the Gospel of Peace. Isaiah says, “but they have not all obeyed the gospel”. What gospel? He has made it specifically clear not everybody has obeyed or believed the Gospel of Peace. For Isaiah says, “Lord who has believed our report?” Report about what? That God is not angry with everyone. To this very day almost no one has embraced that God is not angry with anybody!

I’m just looking down at my feet to see how beautiful they are! Oh my goodness folks, this is  good news, the Gospel of Peace!

Now we’re going to go back to Isaiah which is where Paul is quoting from here. You are going to be very surprised what this connects to in Isaiah 55. We’ve already been through it but I get to go through it again because context demands that I do.

“Who has believed our report? And to whom hass the arm of the Lord revealed? He is despised and rejected of men, a Man of sorrows. Surely He has borne our griefs and he has carried our sorrows. But he was wounded for our transgressions. He was bruised for our iniquities; the chastisement of our peace was up on him” (Portions of Isaiah 53)

What is the good news that nobody has embraced that very few believe? It is this very statement ‘the chastisement of our peace’, between us and God, was upon him. The chastisement of our peace was upon him and with his stripes we are healed. The context of this isn’t talking about physical healing, as is preached in Christianity all the time. It is the healing of the relationship between God and man. There is no one that’s left out!

I want you to see the context. It goes on;

Just so you know for sure, we’re talking about Jesus.

“He was brought as a lamb to the slaughter and as a sheep before his shearers is dumb so he opened not his mouth. He was taken from prison and from judgment, who shall declare his generation?”

It goes on to say;

“He made his grave with the wicked and with the rich in his death because he had done no violence, neither was there deceit in his found in his mouth”

“Yet it pleased the Lord to bruise him; he hath put him to grief. When thou shalt make his soul an offering for sin, he shall see his seed, he shall prolong his days, and the pleasure of the Lord shall prosper in his hand. He shall see the travail of his soul and shall be satisfied. By his knowledge shall My righteous servant justified many.”

The term many is used many times in the King James Version but it never means a limited number. It always means it is completely inclusive.

The gospel of peace is so incredibly powerful. It is the foundation of the gospel just as Paul said in Romans that if you’re sent by God, you’re proclaiming the Gospel of Peace. The other side of that coin is if you’re going around telling people God’s angry you’re not sent by God.

Jesus knew he was going to the cross and said “now is the judgment of this world” and he said “if I be lifted up” speaking of being lifted up on the cross, “I want to draw all judgment and all men unto myself. The Jew and Gentile, all judgment, all in one body”. God was convinced he was gonna do it. Jesus was convinced he’s going to do it but Christianity says he didn’t do it!

You might be thinking, Michael you’re awfully audacious to say how much you disagree with Christianity on this point. I am so glad I’m not one of them because when people say that God is angry they’re insulting the very work of the cross! Don’t you be fooled by Christianity!

The gospel of peace is something that was established by God himself through the work of the cross. It is God who said I will never be angry with you again.

Look what it says in Isaiah 54;

“For a small moment have I forsaken thee, but with great mercies I will gather thee. In a little wrath I hid my face from me for a moment; but with everlasting kindness will I have mercy on you. For this is as the waters of Noah unto me, saith the Lord, for as I have sworn that the waters would no more cover the earth,  so I have sworn I would not be angry with the nor rebuke thee. The Covenant of my peace will never be removed”

life. This is a powerful gospel! I tried to see what’s online, I Googled ‘Gospel of Peace’. Most churches don’t teach anything about the Gospel of Peace, at least in context. What they were saying was that the Gospel Peace means you can have peace in your heart. There’s no context of that. I’ve got peace in my heart but it’s a result of the Gospel of Peace. It’s the fact that God’s not angry with me or anyone at all any more. That’s why I have peace. I know who I am in Christ, that I have no doubts about.

You cannot take away the Gospel of Peace from its partner, the promise that came out of the flood. The first judgment came and the entire world benefited from it. Everybody that lived on the planet benefited from that promise and the promise that came out of the cross you cannot say it does not benefit the whole world. If it only benefits believers then only believers could be the ones benefitting from God’s promise about the flood.