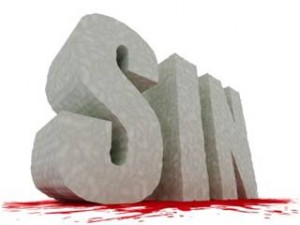 Like many of you, I teach and / or think on this gospel every single day of my life. I think about its consistent, fractal-like continuum, and it’s finite and infinite nature. Constantly, I am amazed that to date, I have not had to reply to a single question with even one if, and, but or maybe. Let’s face it my friends. We have struck gold! Of all the realities of the gospel, this one stands at the front of my own personal reality like the sunrise of a new day, a day that has no end. Sin has been destroyed! Words fail me.

Most all decent teachers on the subject of grace will all say, “Christ died to forgive sin, past, present and future,” to which I say, “NO! A million times, NO!” If Jesus is forgiving present sins and will forgive future sins, his blood is no better than that of a goat!

The difference between the blood of Christ and the blood of a sacrificial goat is not that Jesus’ blood deals with sin “better” than that of the blood of a goat. Sin coming between God and man first requires there to BE a “God and man” to be between! But when we and God are one in Christ, there IS no “God and man” There is only ONE. Invent “TWO” though, and then you can have relationship problems. In Christ there is no such thing as sin. When we see things in this light, we might even say that sin consciousness is the only devil left to defeat on this planet.

What is sin consciousness?

Sin consciousness is any thought that applies a spiritual consequence or reward to any action or deed. Let’s think this through. ALL religions, without exception, teach spiritual reward and consequence to actions and deeds or the lack thereof. Even if you come up with another word to replace “sin,” the application of “something out there” is working either for or against me and is indeed sin consciousness.

It seemed almost easy to stop thinking that hell was waiting for my deeds, especially after I stopped “confessing my sins.” However, after that, I started noticing comments I would make that seemed odd for the first time in my life. Statements like, “Wouldn’t ya know it? Why does this happen to me every time? Why me?” Now the statements are fine as stand-alone comments, but I noticed they rarely come out without this inference that some spiritual force is working against me. THAT is sin consciousness!

This is life to me: There is nothing spiritual working for or against me apart from that which proceeds from within me. Christ in us. The hope of glory!