It all started as a desperate search for the Gospel truth after years of walking in the darkness of religion to no avail. I could not find truth in religion until I stumbled onto the Gospel Revolution website and my eyes were opened. I downloaded all the webcasts in the archive, listened to all of them and this I have continued to this day.

This I did alone with my wife and two sons in our house which is far away from Nakuru town where I had to walk and listen and download Mike Williams’ messages. Later I started sending questions for the webcast, which Mike Williams answered to my satisfaction.

As Mike Williams’ heart is for the people to know the truth of the gospel, I set up an office in Nakuru town to distribute at least the few materials I had from the Newsletters by Mike Williams. On the 28th of March 2012, during the webcast titled “Big News”, Mike Williams announced the first Gospel Revolution School of the Scriptures in Kenya. Then Mike pledged to support this school with all the teachings for free and later purchased a laptop and a modem for us for easier access to the internet.

We grew from a family of four, to nine and to-date the school has a total of 38 students. We meet on Wednesdays and Sundays every week to listen to Mike’s messages and sometimes I teach the students and answer most of the questions they ask. I throw the hard ones to Mike to be answered on the webcast.

We have campaigned in Nakuru Town and its environs, especially with the help of the street boys. They distribute flyers together with us because we have recognized that they are one with us. They are as righteous as anyone else. Many pastors and the clergies have been calling me for the messages and they get them from our office here in Nakuru.

This date marked a turn of events for the entire Gospel Revolution and the School of Scriptures in Nakuru Kenya. Mike’s messages went on the air on a national radio station, Hero FM, playing 2 times a week – each time for 30 minutes. The second show of the week is in Swahili, the Kenyans’ national language. This is translated to Swahili and voiced by a member of the school of the scriptures whose name is Pius Agata. The show airs on Tuesday at 8:30 and a repeat in Swahili on Thursday at the same time. We started with the message “Redemption of the world”.

The station reaches an audience of three quarters of the whole nation’s population. A small part of Uganda near the border with Kenya called Malaba is also listening. A friend of mine doing business there tuned in to the station and called me confirming that he heard my name during the introduction of the message. The most listening group is the youth because they are the ones following up and coming for the messages in the office.

It’s amazing that even the Muslims are listening to Mike’s messages through the radio. A case in point is where a man by the name of [name redacted for safety concerns] called me asking for the CDs, Redemption of the World-You must be born again after listening to the radio show. I directed him to the office. We chatted for a long time. He congratulated Mike for the messages, saying that “that message is not for the Christians. It brings equality to all, I didn’t know Christians are that confused and lost”. Those were his words. From that time he became my friend. We always talk on the phone with him and sometimes he visits us in the office for some answers to questions.

All the contributions to finance this radio show were made by the students of the School of the Scriptures themselves. Prior to this, we had a long conversation with Mike about this issue and he gave us a go ahead and used what we had at hand. We intend to continue having this radio show even after the first phase is over which was to last a period of 6 weeks starting from July 1st 2012. 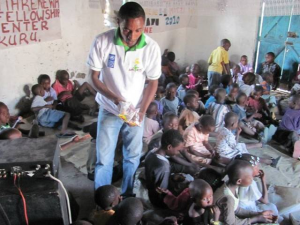 This is one of the corporate social responsibilities that the college will be undertaking regularly besides other extra-curricular activities.

This is one of the major fruits of the radio show. I know many lives will be reached by these good news messages of Mike Williams before the air time we already purchased is over.

Bro. Mike’s accent is very good in that many Kenyans easily understand it. They usually joke that Mike must be a Kenyan because his English and accent is okay with them.

I know without a doubt that at least over half a million Kenyans are now aware of the Gospel Revolution, Mike Williams Ministries and the School of the scriptures, all through the voice of one man, Mike Williams.

Mike, we thank you so much for what you are doing for the lives of human beings not only in the United States but also in the continent of Africa, Kenya and Uganda in particular, and the whole world in general.

Keep up the good work Mike. We shall support your effort in all that you do for the beautiful humans in the world.

I have not talked about the challenges we are facing but I tell you they are there. We have been called extremists, antichrist, false teachers, cults and I even have information that some religious churches are praying against us. Most pastors have seen and read our flyers and have preached against them in their churches.

Again, the opposition is from the Christian radio station, especially one that is affiliated with TBN. They refused to sell us air time because of the content of the message. In fact, the station that we are using is one of those so-called “secular/commercial” radio stations. All they need is money as they are in business but fortunately it reaches as many people as possible.

So we are up for the challenge. We are not relenting whatsoever. Truth is the absolute defense. 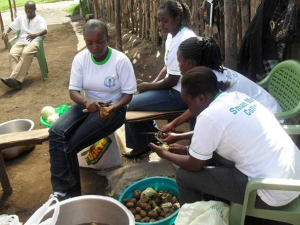 Through your personal support, Mike, I have progressed very well. I have paid the Landlord the amount to give me the premises, and secured most of the equipment that was auctioned. I am now doing some renovations in the rooms and also finalizing the registration process with the government and the Ministry of Education.

I have also called the students back through their parents and also the lecturers. We are reopening on the 1st of August, 2012. I am also planning to do an advert on the radio about the new college in town together with a road show.

The college will also be a good opportunity to tell the good news to students, staff and the parents, especially during graduations and parents’ day meetings.

We shall continue supporting the children’s home as I told you earlier and sent a photo to you of the same which was an initiative I had started before the former college was closed down.

Mike, you have given employment to the teachers, education to the students, joy to the parents and the guardians and also developments to the nation of Kenya because this college has to grow to the university level with time. We appreciate you sir.

The college will also be the major source of financial support to the School of the Scriptures for things such as printings, radio shows, travels and adverts and many other needs that may arise.

The vehicle that you are planning to help me buy will do a great job for the College, the School of the Scriptures and also transportation.

All I can say to you Mike is THANK YOU!

You are a friend forever.