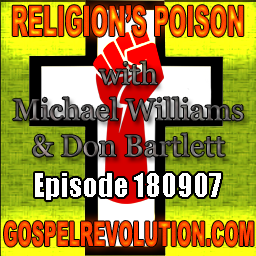 Have you ever noticed that wherever you find politics, something get’s poisoned? Sadly, all to often, truth is the first casualty.
That is what went down in the Book of Galatians. Paul was the first one who opened the eyes of his converts in Galatia to their freedom in Christ.

Pretty soon afterwards, along comes the gang of three: James, Peter and John to convert them to “Jesus plus something”. In this case, it was keeping the Old Testament Jewish law. Paul calls them out as being brain-dead – and consequently brain-chained. James, who was a “Christ doubter” and who tried to lead Jesus to his death, succeeded with Paul eventually. James was never a disciple and never an apostle. Jesus described him as a devil follower. With these qualifications, somehow James jumped the queue to be the first Church Pope and dictator.

In this Powercast , Michael and Don explore Paul’s antidote to the poison of religion. Enjoy it. And please share it with your friends and family!