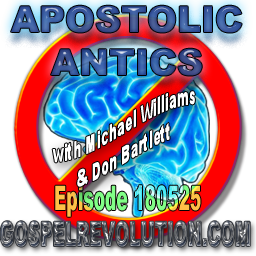 Right here in the first chapter of Acts, we are forced to choose whether the Apostles were flat down stupid or intentionally thumbing their noses at Jesus. The clues have been there all along and we have missed it. And as this is the foundation of the Book of Acts – whats that say for the rest of the history of the early church in Acts. Contributors this week include, Dale VanSickle, RobCrazyKeys, Mark Kennedy, Daniel McInnes, Jackie Barnard and Vic d’Obrenan. Topics covered include the absence of checks and balances in Christianity, James the Jerk, whether all Old Testament prophecy was about Jesus alone, end times fatigue, how christians are getting more asnd more afraid to share their “gospel”, and the sheer lunacy of trying to make Paul and the other disciple’s writings gel.