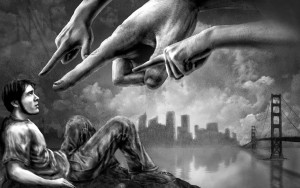 It seems to me the human race is on an unrelenting quest, do or die, toward the ever elusive freedom from guilt.

Freedom from guilt is so obscured from the realm of reality for us that The American board of Psychiatry and Neurology gives very contradicting views of the subject. Try and google “guilt and psychiatry.”  You will find numerous references to guilt being the super-source of many if not most mental and emotional disorders. They point the finger at guilt much of the time when trying to find the root causes and cures for these disorders.

Without being in church at all, you will hear the counselor say, “You must forgive yourself;” you must forgive that person” or “is it your place to judge?”

Anyone need a headache medicine yet?

I know the response I would get already at this point, “There is good guilt and then there is bad guilt.” Really? So, which guilt is good and which one is bad? I do not recall during years of psychiatric treatment being told there was a “good” kind of guilt.

I think somewhere in life we each have had a thick, cold, heavy, wet blanket of guilt thrown over our shoulders. Ever since that day, each person searches for a way to rid themselves of this unwanted, mind altering coat of guilt.

Throwing everything and everyone away seems to be the biggest and most visible effort to cast off our unwanted garment of heaviness. You see, saying, “I do not care what people think or say about me!” Is not freedom from guilt. “I do not care!” is a “herniation” of the soul from the heavy load we have carried for way too long. “I just do not care” is not freedom from guilt. I have found this to be true for myself. I do care what people say and think about me. However, I am not moved by either.

Dutifully trudging along, keeping the pace, abusing ourselves with food, alcohol, drugs etc. may also be a “coping with guilt” manifestation also.

But wait! There’s more! Much more!

Christian Psychology – Real Guilt is a Result of Real Sin

The following is an excerpt from Understanding the Times: The Collision of Today’s Competing World Views by Christian author David Noebel.

“For the Christian, however, each time someone rebels against God, he or she is committing a sin and the feeling of guilt that results from this rebellion is entirely justified. Because Christian psychology acknowledges the existence of real, objective guilt, it alone can speak to a person who is experiencing such guilt.”

I think we can cover this subject for at least the next three weeks!  In the upcoming Powercasts entitled “Freedom from Guilt Trilogy”, we will be discussing guilt and the true freedom from guilt that comes from understanding the cross.

We also begin our Spring pledge drive this week, in which, we will use no guilt to solicit funds! Thanks in advance for all that I know our friends and supporters will do to help get the good news out!

The blood of Christ has taken away guilt and the Gospel renews the mind from its phantom effects!